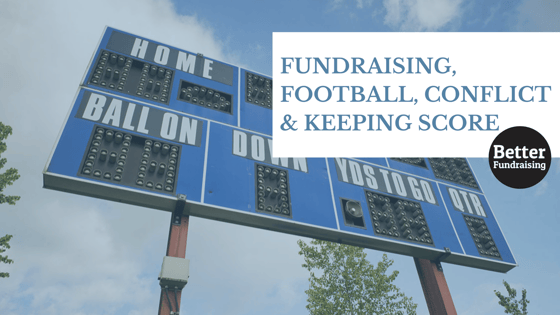 This article is written by Jim Shapiro, and was previously published by our Strategic Partner, Better Fundraising.

As Steven mentioned in yesterday’s email, I’ve been a football coach for a very long time. And for the record, my helmet when I played was not leather. 🙂

I’ve noticed some fun similarities between football and fundraising:

Finally – but worth spending a moment on – there’s conflict in fundraising and in football.

On the surface, the conflict in football is more physical. But there’s also conflict over who gets to play and who doesn’t. There’s conflict between coaches over what plays to run. (The game is often more draining mentally than physically.)

The same is true in fundraising. There’s conflict between staff over the content and frequency of fundraising. In smaller organizations, there are often disagreements between Board and staff over fundraising methods.

The reason I bring this up is because football has one clear advantage over fundraising in this arena: keeping score is a lot easier. When you try something one week, the scoreboard tells you right away whether it worked or not.

“Keeping score” and knowing whether your fundraising worked or not is more difficult – but it’s more important! The coach in me is constantly encouraging organizations to measure their performance more closely.

A question I ask all the time is, “What is your retention rate for your major donors?” Too many organizations don’t know. They haven’t “kept score” to see whether their fundraising efforts are effective at keeping their major donors around! (And their Majors are often giving more than 80% of the total revenue an organization receives from individuals!)

My encouragement to nonprofits goes back to one of the similarities between football and fundraising that I mentioned at the top: keeping score (measuring the performance of your fundraising) is a skill your organization can learn.

Here are a few of the main metrics we advise nonprofits to track on an ongoing basis:

That’s just a start, but it’s a good start. If you learn the skill of tracking your performance and then “basing future decisions off of past performance,” your organization gets better faster at fundraising. As a result, you’ll have a larger impact!

This post was originally published on August 19, 2021.
More articles from Better Fundraising can be found here.