Shiloh Baptist Church (SBC) is a Bible-believing, Bible-teaching church and a well-known landmark on the West End of the City of Plainfield, New Jersey.  It is a community church located in a diverse neighborhood where it has remained throughout its rich 113-year history.  SBC continually serves the residents of the impoverished area surrounding the church facility ripe with unchurched residents of all ages.

Shiloh Baptist Church has been serving God and the Plainfield community since 1908. "Born" from Mt. Olive Baptist Church, Shiloh Baptist Church was organized May 17, 1908, at Reform Hall under Reverend M. A. Alexander’s pastorate. The first few months of services were held at Reform Hall and later moved to the Third Street Hall. In 1909, Shiloh purchased its first property at Fourth and New Streets, and that property was sold in 1914 when Shiloh bought and moved to its current location at 515 West Fourth Street. The building that existed on the property was remodeled and served as the place of worship until construction on the next building began in 1931, under the pastorate of Reverend L. E. Keiser.

In the 1940s, under the pastorate of Reverend A. Ross Brent, Shiloh began acquiring adjacent properties as they became available. During this period, the church property was extended through to Fifth Street. In 1961, Shiloh became a charter member of the Progressive National Baptist Convention, Inc. The church continued to grow numerically and financially during the tenure of Dr. Brent. He retired in 1977 and served as Pastor Emeritus until his death in 1984.

During the 1980s and 1990s, under Reverend Jerry W. Henry’s pastorate, Shiloh's membership grew dramatically. To meet the spiritual needs of the growing congregation, many new ministries were introduced. In 1986 the Tape Ministry was established to record Pastor Henry’s Bible teachings so the congregation would grow in God’s Word and be strengthened in the daily Faith Walk. This Tape Ministry also provided a means for the gospel to indeed be "spread into all nations." Reverend Jerry W. Henry passed away in December 1995.

In March of 1997, Shiloh called its eighth pastor, Reverend Gerald Lamont Thomas, Ph.D. Under his visionary leadership, new ministries and spiritual opportunities were introduced, including "Rites of Passage" for young people and "SIBLE" (Shiloh’s Institute of Biblical Learning and Education), forming the support structure for our Sunday School and Discipleship Training.

In May of 2003, the former facility was demolished, and construction on a new $13.2 million, 69,500 sq. ft. state of the art church facility began. On March 25, 2005, Shiloh dedicated its new church facility and held its first worship service in the new building.

On September 7, 2005, The Union County TEAMS Charter School (UC TEAMS) opened its doors after leasing space from Shiloh. The school was housed in the lower level of the new Shiloh facility. The school now has classes from K - 12 and held its first high school graduation in 2013. Many of the high school students enrolled at Union County College in Cranford, taking college credit courses while attending UC TEAMS.

In January 2015, Reverend Thomas announced his retirement and officially retired as the pastor in August 2015. Shiloh went in prayer as the appointed pulpit committee began its search for a new senior pastor.

On March 1, 2017, Reverend Hodari Kenneth Hamilton, Sr. began his leadership role as Shiloh’s ninth senior pastor. During his tenure at Shiloh, Reverend Hamilton established and hosted a weekly prayer conference call held every Wednesday at 7:14 am. The time was significant in that it coincided with the scripture written in 2nd Chronicles 7:14. Reverend Hamilton also started a Sunday Basketball program during the church worship service to reach young males. As part of their participation in the game, the youth also received a word from the Lord. Reverend Hamilton announced his resignation on October 13, 2019, to pursue other opportunities. At the year-end church conference on January 26, 2020, a new Pulpit Search Team was introduced to begin the work of identifying the senior pastor that the Holy Spirit has already appointed for the Shiloh Baptist Church. The Pulpit Search Team was accepted by a majority vote by the congregation.

Shiloh, a forward-moving church, has embarked on a spiritual journey to recruit and identify the 10th pastor to serve and lead its congregation.  The Pulpit Search Team is being led by the Holy Spirit to seek discernment in its mission to identify God’s next pastor for the Church:  a pastor whose daily walk reflects Christian ideals and who, through his/her leadership, along with Bible-based teaching and preaching, shall help create an environment for sustained multi-generational growth. 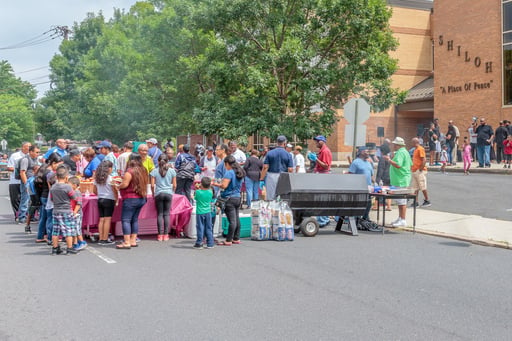 What it's Like to Live in Plainfield, New Jersey:

The City of Plainfield, NJ, is a suburban treasure with a rich history and energy which has attracted people from many different cultures and backgrounds. Plainfield is a great place to live, not just make a living. Throughout most of its century and a half existence, Plainfield has included a thriving African American community. The African American presence remains, but like much of the United States, the population mix is changing. As of 2017, Plainfield's population was 43.6% Latino, 39.2% African American, 8.67% White.  The remaining 9% was Asian, and others.

There are higher education opportunities available in Plainfield, including a school that offers degrees in Nursing and Imaging. These schools are part of the JFK Hospital system. There is also a campus of Union County Community College located in town.Although privately owned vehicles are the transportation of choice in Plainfield, there is direct bus service to New York City and other locations within and around the city.  There are also two train stations for NJ Transit's Raritan Valley Line, which connects to Newark and New York Penn Stations.  Newark Liberty Airport is a half-hour away.

Over the last twenty years, the city government has placed considerable emphasis on redeveloping and repurposing properties in the central district and along the commuter rail line.   Many of these projects have recently been completed and contribute to a modern, upscale look.  In recognition of the city’s ongoing efforts, Plainfield received two awards from the U.S. Conference of Mayors in 2019.  In October 2019, Plainfield Mayor Adrian O. Mapp received The Livability Award, which honors Mayors who display exceptional leadership abilities by creating initiatives that make their cities safer, cleaner, and more livable.  Mayor Mapp created the Quality of Life Task Force for this purpose.  At the same time, the city received the Community WINS award that recognizes cities that “drive neighborhood stabilization, economic development, and job creation.”  The award consisted of a $50,000 grant used by the Second Street Youth Center for their Pathways to Stabilization initiative. Plainfield also offers a small town’s quaint charm through its ten historic districts and housing stock of mansions, private homes, garden settings, and picturesque, tree-lined streets. Plainfield’s remarkable natural landscape includes two significant parks that enhance its many attractive neighborhoods. So visit Plainfield and enjoy everything the City has to offer.