Over 18 total Christmases, I had the privilege of watching a church's Christmas Eve services grow from 75 people in one service to over 5,000 attenders in multiple services. It went from a small church event to a community-wide tradition.

What time of year is more associated with music than Christmas? Christmas music will start playing before Thanksgiving on the radio, in malls, and in offices. Some of the best music ever written is associated with Christmas (e.g. Handel’s Messiah). Use a variety of music, both sacred and secular, upbeat and joyful, slow and moving, performed and participatory. Our musicians did a great TranSiberian Orchestra type medley, and the crowd stood and roared!

Henry Wadsworth Longfellow, during the Civil War, received word that his son had been wounded in battle, and he wrote I Heard The Bells On Christmas Day. The lyrics—about no peace on earth but God and right prevailing in the end—are very moving. Our band played and sang while pictures on the screens were shown of American troops overseas in various scenes like helping a child, standing in a circle praying, or gathering around a small Christmas tree.

The unchurched and seekers are not familiar with a lot of Christian music, but everyone knows songs like Joy To The World, O Come All Ye Faithful and Silent Night. Music defines the Christmas season like no other time of the year!

We planned our Christmas Eve services for sixty minutes, and were ruthless in staying right on that (we had to when we had multiple services and you had to empty the auditorium and get cars in and out of the parking lot)! In our advertising we advertised not only the starting time, but the ending time (e.g. 5:00-6:00; 6:30-7:30). If people are heading to the houses of relatives as part of their Christmas Eve, they want to know how to plan.

Keeping a Christmas Eve service short and sweet is essential to reaching the community.

This also means your volunteer teams have to be on top of things, starting in the parking lot with people directing traffic, to ushers inside helping people find seats. Start on time and end on time! People knowing what to expect time-wise helped our Christmas Eve services grow!

My message at the Christmas Eve services was about ten minutes long. I don’t believe preaching a 30-minute three point sermon is your most effective outreach on Christmas Eve. Sometimes preparing a ten-minute talk requires more work than one lasting thirty minutes or more!

Christmas is a time of traditions. It could be a certain day the tree is always decorated, foods that make an annual appearance, or advent calendars leading up to Christmas. Most of our Christmas Eve services had creative elements that were unique to that year, but there was one thing that was always the same—singing Silent Night and lighting candles at the end. It was amazing how people looked forward to that, especially children! The scene was moving as the lights dimmed and you looked across hundreds and hundreds of candles glowing.

4. The Most Important Thing!

We always had ushers at the doors, and as people left they were given a colorful flyer about the message series starting in January. Don’t give them as people come in, they will just be left in seats and on the floor. That also means you need to spend some time thinking over what message series will attract people to come back. Announcing that coming in January you are continuing your 28-week series in the minor prophets probably isn’t going to do it!

I used to drill it in to our ushering team that they had the most important job—getting that card about the new series into the hands of people as they left.

One last note: There will be some who will disagree with this, but we never took an offering at Christmas Eve services. We saw it as our gift to the community. Some leaders in the church thought we were missing an opportunity, but I resisted. Many guests were surprised that we did not take an offering, and that was a good thing! Gave them a new view of the church!

Christmas Eve services are a great opportunity for your church to impact the community.

Plan and pray that God will use those for eternal impact!

How can you incorporate these practices into your church's Christmas Eve service?

If you liked this, you'll also enjoy 10 Tips For An Effective Christmas Eve Service 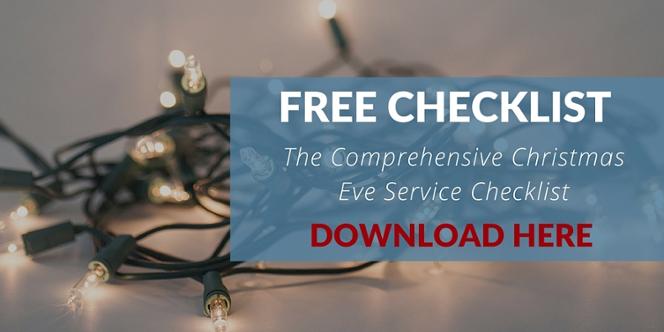