Podcast | How God Built This with Luis & Kevin Palau 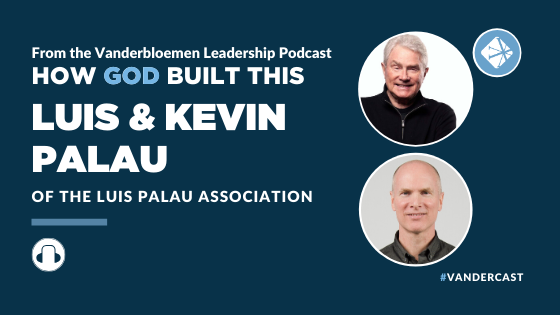 On the latest How God Built This episode of the Vanderbloemen Leadership Podcast, William Vanderbloemen, our founder & CEO, talks with Luis and Kevin Palau of the Luis Palau Association, who have coordinated hundreds of citywide campaigns in dozens of nations, including major evangelistic festivals on five continents.

Luis is a dynamic evangelist and teacher, living a life of dedicated service and commitment to God as he shares the life-changing message of Jesus Christ.

His son, Kevin joined the Palau Team in 1985 and began directing the day-to-day operation of the ministry in the late 1990s. Under his leadership, LPA has partnered with tens of thousands of local churches to produce large Christian gatherings in cities around the globe.

William, Luis, and Kevin talk about how evangelism has changed since Luis began his journey in his 20’s, and what they learned traveling the world spreading while sharing the Gospel.

Luis Palau and his ministry have shared the Gospel with hundreds of millions of people through evangelistic events and media around the world. He has spoken in person to more than 30 million people in 75 countries, with more than 1 million registered decisions for Jesus Christ.

Luis Palau festivals have produced massive audiences in cities from south Florida to South America. His radio broadcasts in both English and Spanish are heard by millions on 5,000 radio outlets in 48 countries. Among other top-tier programs, Luis currently hosts Luis Palau Responde, an international Q&A program in Spanish, and Reaching Your World, a devotional-style program emphasizing biblical wisdom. He has authored close to 50 books, contributed articles on issues of faith to countless publications, and counseled business leaders, political leaders, and heads of state around the world.

Kevin Palau is president and CEO of the Luis Palau Association. Kevin joined the Palau Team in 1985 and began directing the day-to-day operation of the ministry in the late 1990s. Under his leadership, LPA has partnered with tens of thousands of local churches to produce large Christian gatherings in cities around the globe, including major evangelistic campaigns in Washington DC; New York City; Buenos Aires, Argentina; Ho Chi Minh City, Vietnam; Addis Ababa, Ethiopia; and Dar es Salaam, Tanzania.

In 2008, Kevin pioneered the Festival 2.0 model that includes a citywide service initiative preceding the festival event. Designed for long-term sustainability well after the festival, this service initiative also gave birth to Palau’s City Gospel Movement effort which is now focused on celebrating, accelerating, and inspiring hundreds of Gospel Movements in cities around the world. Kevin's unique passion, and the focus of the City Gospel Movements Team, is to inspire leaders to keep evangelism as a central focus in their ongoing gospel movement.

Kevin also helped develop Palau’s Next Generation Alliance, which exists to serve up-and-coming evangelists through mentoring and equipping. The experience and resources that have grown out of decades of work with other evangelists have also helped birth a new movement, working with organizations around the world to create a global network of evangelists.

Kevin holds a degree in religious studies from Wheaton College. He lives in Beaverton, Oregon near LPA’s headquarters with his wife, Michelle. They have three grown children.