My Latest Learnings About Succession Planning and Internal Candidates 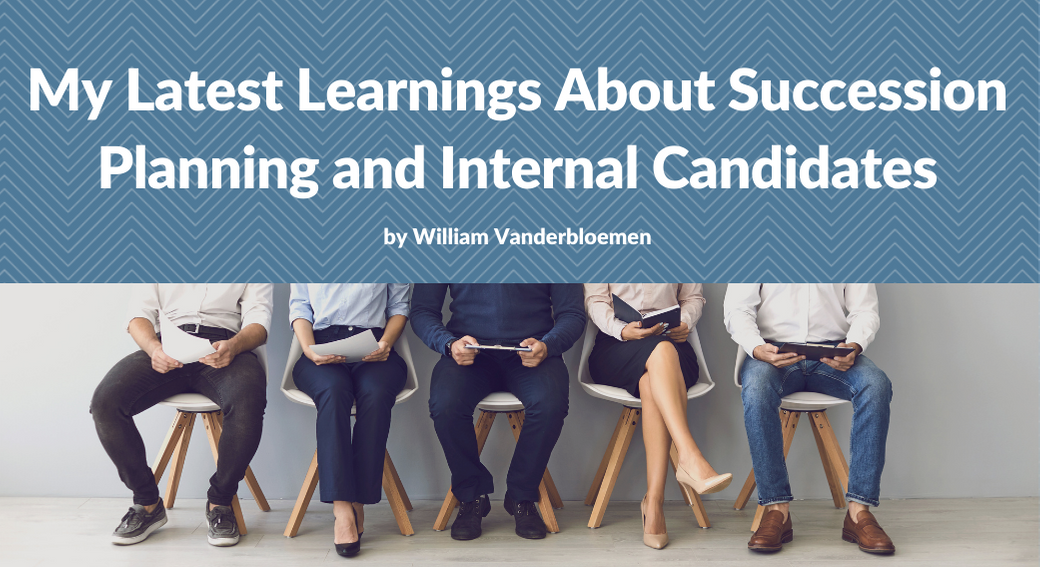 Many times people ask me, “William do we need to find a candidate that we don’t know about, or should we look at candidates we already know?” Most often, this takes the form of a question like “William, we have a great candidate on staff who could be my successor. How should we figure out if he’s the right guy?” Determining a new leader for your church is a high-pressure and high-impact decision that shouldn’t be taken lightly.

Here are some lessons I’m learning about assessing internal candidates.

1. Look in the family….with a warning

I think internal candidates are a fantastic place to start your search for a successor. That sounds like I’m working myself out of a job, but I’m not. The longest standing metaphor I can find for a succession is that of a heart transplant. And if you talk to transplant doctors, you’ll find out very quickly that there’s one aspect of transplant that separates the best from the rest. It’s the tissue match. You can find a very healthy heart, and put it in a very healthy body, but if there is no tissue match it’s a bad ending for everyone.

Having said that, not every family member is a tissue match. Not every tissue match is the right transplant for the next 20 years of your organization. I grew up in western North Carolina, not far from where deliverance was filmed. If you’ve seen the movie you know the lesson. Constant inbreeding does not end well. Sometimes organizations need an outside voice. Sometimes a fresh perspective is needed, and that is the number one benefit of having an outsider come into your organization.

So how do you know the difference? Hire a transplant doctor. That’s sort of the role that we play in searches. Many times we’re assessing internal candidates and external candidates, and it’s a win for everyone involved. If an internal candidate is named as the successor, they can go to bed at night knowing that the organization has looked everywhere on the planet and isn’t just hiring someone they know, but is hiring the right person for the job. On the other hand, organizations will have an unnatural tendency to look at people they know rather than search the unknown. Having an outside guide will help you as an organization look at both the internal and the external and then objectively choose between the two.

There aren’t many cardinal rules in succession, but here’s one of the few that I know. When working with a faith-based organization, it is not a good idea to pit candidates within the organization against one another for succession.

Many years ago, when Jack Welch was looking for his successor, he had three internal candidates at GE that all could’ve been his successor. He told all three of them that they were all candidates, and that the horse race was on. It sounded like such a fresh, transparent, wonderful way to find a new successor.

3. Take ½ the time you think you should

Many times when looking at an internal candidate, I find clients that have someone on staff who “isn’t quite ready.“ A period of overlapping the outgoing leader with the incoming is often a good solution. So how long should you take to get them ready? Is there a way to allow a candidate to overlap with you as you step out of office and they step in as your successor? All valid questions.

In fact, the most common question Warren Bird and I are asked about succession is “how long should an overlap be between my successor and me?“

Warren and I both agree that we have yet to see an overlap go longer than two years and have positive return. Most people think two years isn’t long enough, but once they’re going through the succession, two years is too long. I’m reminded of my mother’s advice about packing for a trip. She used to say “lay out everything you want to take on the trip. Then put half of it back in the closet. Now you’re packed for the trip.” When you’re looking at an overlap, or a period of grooming your successor, take less time for overlap than you think you need to.

4. It’s only nepotism if you stink

A question I’ve been asked  many times is “William what about my son?“ Or what about a family member? I have one client who says “you know William, I’ve told my family that it’s only nepotism if you stink.“ Fact of the matter is that many faith-based companies are similar to small businesses. And the vast majority of small businesses in the United States are family businesses. Nobody acts like an owner except owners. Nobody thinks like a founder except founders. And sometimes that means the very best successor is a family member.

However, there are some very deadly pitfalls to hiring the wrong family member as a successor. If you’re considering a family member as a successor, I would strongly urge you to get a coach, consultant, or outside opinion to help weigh the pluses and minuses. Sometimes it’s not even a question of whether the person is right for the job or not, but rather how to set them up for success as they step into the new role. Hiring someone with experience in this area could make all of the difference to getting the succession right. And getting it right with family is, in my experience, paramount. Nobody is more difficult to fire than family.

Family may be a wonderful place to look for your successor. Internal staff members might also be great. Just realize that you will naturally have a bias toward internal candidates because choosing what is known is always more appealing than facing the unknown. That bias is natural, it’s real, but it can keep you from making a wise decision.

Follow these learnings that I’ve seen. After managing a couple thousand successions in my time in this role, I can tell you that taking a little extra time, spending a little money to get it right, and being careful will pay big dividends in the long run.