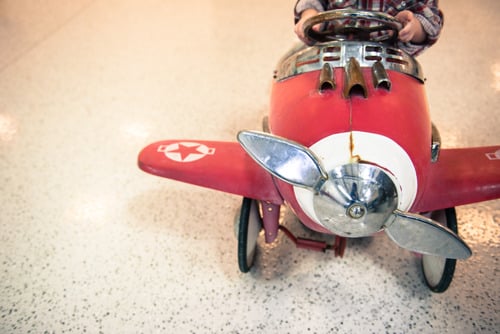 After his trans-Atlantic flight in 1927, a kind of mania swept the nation about Charles A. Lindbergh. Parks, children, streets, bridges, mountains, and schools were named after him. Western Union got so many messages that it had to assign thirty-eight full-time employees to manage them all. Lindbergh had subscribed to a newspaper-clipping service so that his mother could read articles about him in newspapers, but by the end of the first week after the famous flight, she was shocked to learn that a fleet of trucks was loading up several tons of newspaper articles to deliver to her house. At least 250 popular songs were written to honor Lindbergh and his flight.

However, three years before the now-famous flight, there was a little known incident involving Lindbergh crashing a plane. Lindbergh and another man were flying to California when, due to a fuel miscalculation, they had to put the plane down in a plowed field in Camp Wood, Texas. The field was too small and soft to take off from, so the plane was moved to the main street of Camp Wood, refueled, and readied for take off. Lindbergh was going to use the main street for a runway, a real challenge since the street’s telephone poles were only forty-six feet apart, and the wingspan of the plane forty-four feet. As the plane increased speed down the street, a wheel hit a rut causing a wing to clip a pole, and the plane turned sideways and crashed into a hardware store. Fortunately, no one was injured.

There is a lesson in here for churches, especially church plants that are just taking off—leave yourself plenty of room so that when you hit a bump you don’t crash!

Churches, here are three areas where you should leave yourself some room:

One way that churches in transition hem themselves in is by overly detailed and restrictive by-laws. Some church by-laws are so detailed that they stipulate matters such as what type of committees the church will have.  Essentially, this means they will have no more and no fewer committees than prescribed. How is that church going to adapt to changing times? As Rick Warren has aptly said, teams that know how to call an audible win the game. In a football game a play may be called in the huddle, only to find when it lines up against the defense that there is no way it is going to succeed. That is when the quarterback changes the play by calling an audible. Churches need to be agile and flexible to meet the many changes of life.

Another way churches limit themselves, especially churches in a season of growth, is by buying property too soon and too small. Churches grow weary of rented facilities, and set-up and tear-down every week is difficult. So some, in their haste, buy a piece of land far too small, and the shoe is forever going to tell the foot how big it can get!

Other churches get narrow in things like the curriculum they will allow to be used in their children’s ministry. It has to be from the publishing house of their particular denominational tribe. Couldn’t you look for what is the most creative and effective, and if needed, tweak it a little to fit your theological preferences?

Paul exemplified amazing agility when he wrote, “When I was with the Jews, I lived like a Jew to bring the Jews to Christ… When I am with the Gentiles who do not follow the Jewish law, I too live apart from the law so I can bring them to Christ… When I am with those who are weak, I share their weakness, for I want to bring the weak to Christ. Yes, I try to find common ground with everyone, doing everything I can to save some.” (1 Corinthians 9:20-22)

Lindbergh tried to take off with restrictions so narrow that one little bump was going to have bad results. Churches, don’t do the same!

What are some other ways that churches could restrict themselves and hinder future effectiveness?

If you liked this, then you’ll also like Adaptability: The Characteristic of Successful People.