PODCAST | Moving From Surviving To Thriving With Sam Rodriguez 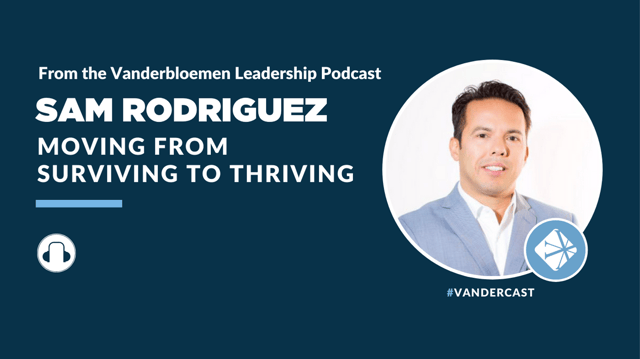 Pastor Sam has advised multiple Presidents of the United States and frequently consults with Congress advancing immigration and criminal justice reform as well as religious freedom. He has been described by Time Magazine and the New York Times as “one of America’s most influential voices.” Sam strongly believes that the world is desperately in need of a generation that will stand up and proclaim “that there’s only one way to heaven and that’s through Jesus Christ!” and he embodies this through his work. He is a movie producer and the author of multiple books, including his recent release, From Survive To Thrive, where he shares his guiding beacons for life, marriage, ministry, relationships, management, and beyond.

On today’s podcast conversation, Pastor Sam discusses his life goal of reconciling Billy Graham’s message with Dr. King’s March by advancing the lamb’s agenda. He shares about how to never sacrifice truth for social or political expediency, rebuking victimhood, and the slippery slope of cancel culture happening in America today. This conversation provides lots of encouragement for aligning our head, heart, and hand to be fully dependent on God instead of society. Here’s William’s conversation with Sam Rodriguez.

How To Remain Steadfast In Faith In The Midst Of Transition with Russell Howard [Podcast] View Post
Podcast
[PODCAST] Growth Strategies for You and Your Organization With Jeff Henderson, Lead Pastor, Speaker, and Author View Post
Church Development, Team Building, Podcast, How God Built This
PODCAST | Evolution Of The Black Church: Pre-slavery—Missionaries In Africa With Dr. Eric Washington View Post
Podcast